“Planet X Update 2020- The Real History of Planet X” eBook
Download Materials Sub-Page
The complete lie has been well kept until my discovery that the Harrington Planet X object was what eventually became the nucleus of the comet Hale Bopp. With this discovery everything now makes sense, including the massive and many disinformation programs that have raged over the discovery in 1991 by Harrington. It is time to open the investigation into the death of Robert Harrington as a murder orchestrated by the CIA.

Here is the material to accompany your “Planet X Update 2020” eBook including the MP3 lecture.

Wikipedia write up on Robert Harrington: This is mouse copied here to show the listing at the time of release of this book in May of 2020. Wikipedia is famous for altering its content once it has been exposed with lies. Note that they only list Harrington as being employed at the Naval Observatory when in fact he was top astronomer (see video below lists him as Supervising Astronomer) of the Naval Observatory. They also ONLY TALK ABOUT THE PLANET X ISSUE … WOW !!!! not a single word about anything else this man did in his career !!! Can you even imagine that ??? Here is a guy who is the top astronomer in the top governmental position in the USA military and they only give him a passing commentary that he “worked there” and the only thing the talk about is dispelling any semblance of conclusion regarding Planet X. Then they posthumously minimize his work and state this ridiculous argument that since one of the voyager space craft lowered the estimate of mass of Neptune by 0.5%, that this somehow resolved the issue of the orbital disparity. This is absurd since the orbits of both Uranus and Neptune were being pulled DOWN out of their orbits which has NOTHING to do with the mass of these planets. Additionally it would require an INCREASE in the mass of Neptune not a decrease if this even were a plausible explanation in the first place (since the orbital change was due to additional forces). WIKIPEDIA is the lying arm of the CIA full of lies and disparaging commentary to keep their many false narratives afloat. One lie begets another and then another until the web collapses under its own weight. Other lies are that Harrington was looking for the planet X object beyond the orbit of Pluto which was totally false in two aspects … He was looking not outside the orbit of Pluto (see the video below) which is relatively near the ecliptic plane (earth’s orbital plane). Harrington was looking far below the entire solar system. His paper copied below from 1988 clearly shows that he had zoned in on the location and that was because they continued to track the perturbations of the orbits of Uranus and Neptune. More CIA contrived disinformation hopes to distract you from the FACT that what Harrington discovered was what later became the nucleus of Hale Bopp. the following is mouse copied –> https://www.jmccanneyscience.com/PlanetXUpdate2020SupplementalMaterials/Robert%20Sutton%20Harrington%20Wikipedia.pdf

the following is screen captured –> https://www.jmccanneyscience.com/PlanetXUpdate2020SupplementalMaterials/Screen%20Capture%20Harrington%20Wikipedia%20page.PNG

Video of Harrington with Sitchin cerca 1986. This was before Harrington found the planet X object in 1989 and in 1986 made the estimate of a 3600 year orbit as noted in this video … which Sitchin repeated and which then was repeated by every “planet Xer” (all of whom were supported under the table by the CIA sponsored disinformation program) throughout the next decades mainly tapering off around the “end of the Mayan calendar” hoax 2012 . The orbit was revised by Harrington in 1992 to be 4200 years but no one knew since Harrington “died” just a short year later and all of his work was buried by the CIA who had co-opted NASA and all things of astronomy associated with this issue. Harrington’s assistant Tom van Flandern quietly withdrew from the entire Planet X scene and was assigned to be the handler of a group that began in 2004 to steal and try to make my work into a crazy topic mouthed by a band of non-scientists and quacks. All of this was supported under the table by the CIA and continues today. Note around time stamp 03:19 in this video Harrington talks about the discovery that Pluto had a Moon which allowed them to calculate the mass of Pluto and this totally disallowed Pluto from being the Plant X object they were looking for. In his accompanying paper listed below he also shows how pluto just happened to be in a location that led astronomers astray including the famous astronomer Lowell and Pluto’s discoverer Clyde Tombaugh (who actually was also looking for the planet causing the discrepancies in the orbits of Uranus and Neptune … the discovery of Pluto was a mistake). Pluto turned out to be in an orbit that, even if it had sufficient mass, would not have accounted for the orbital perturbations of Uranus and Neptune as astutely noted by Harrington in the paper below. So he started looking farther down in the lower regions of the solar system where he eventually discovered Planet X with a 4200 year orbit. This was later to become the nucleus of the comet Hale Bopp which is my main discovery and which ties Harrington’s work to the real discovery. The point is that when Harrington did finally photograph Planet X, it had a companion and this proves unequivocally that Harrington knew how to calculate the mass of an object based on its having a moon. So as I discuss in the book, Harrington knew immediately that his Planet X also had the correct predicted mass of around 4 earth masses. This leads into further lies propagated by NASA on the size of the nucleus of Hale Bopp. You may wish to listen to this video many times to pick up an all the subtle details, remember that now NASA and its CIA controller are desperately trying to cover up everything that is in this video. Note that Sitchin discusses the associated Samarian legends dealing with “other people” associated with this planet X object which comes into play as the CIA went in to assassinate the Heavens Gate group and desecrate the good name of Art Bell.

Other materials that show that this documentation is in all of the established records verifying these publications. Click on the photos in the table to enlarge for full screen view. 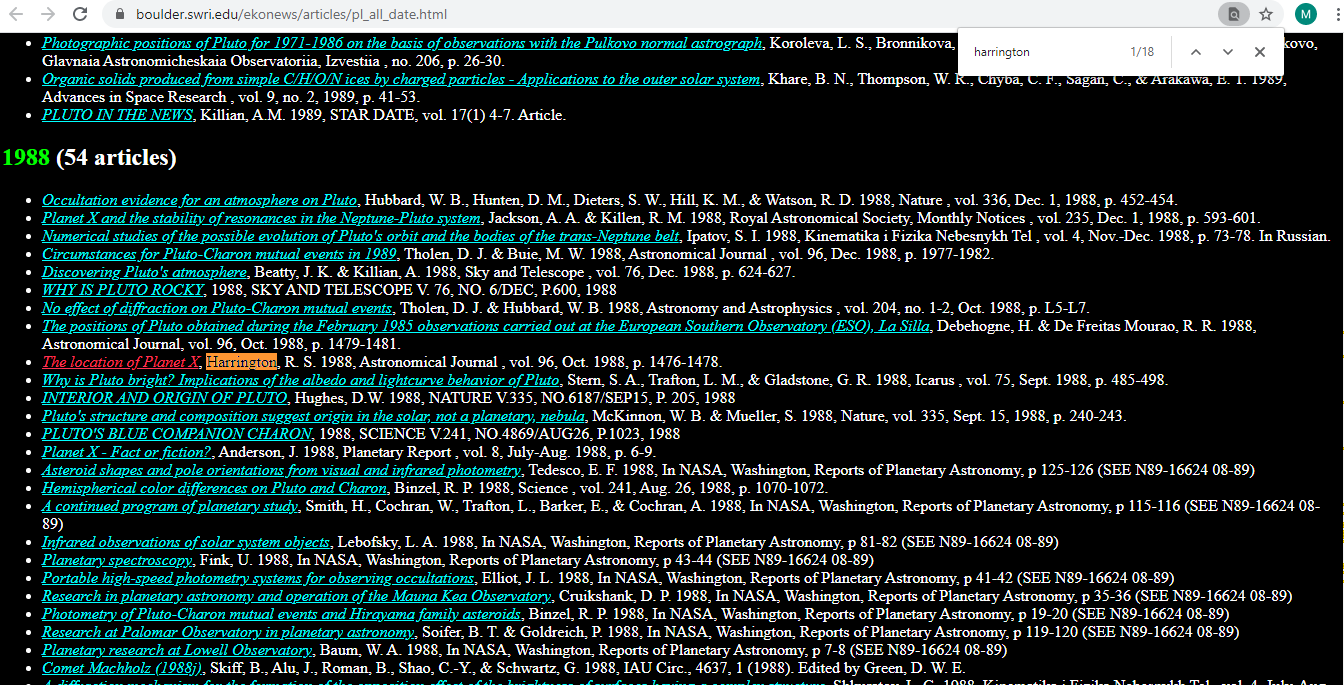 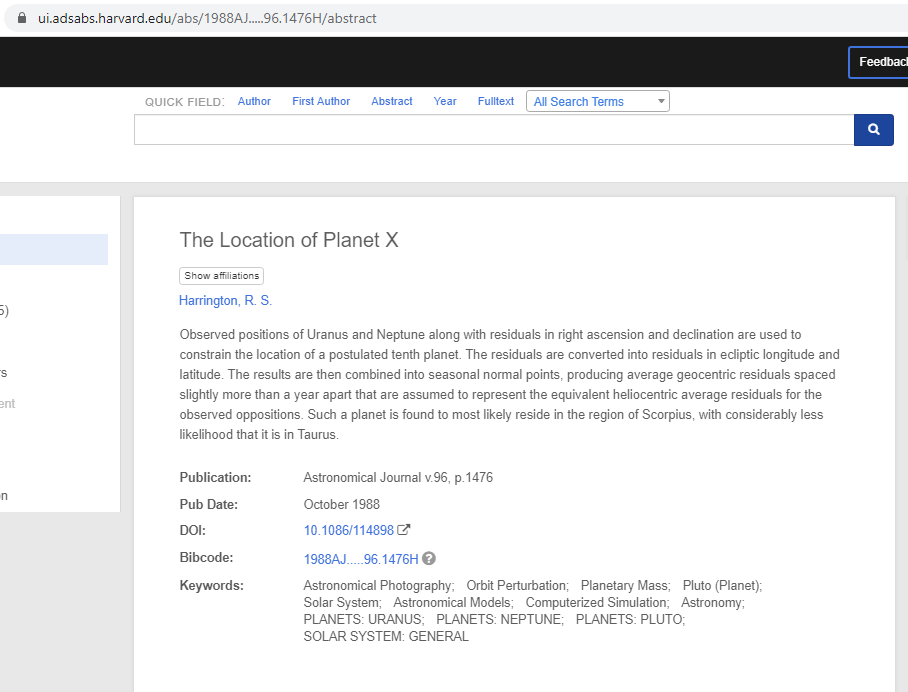 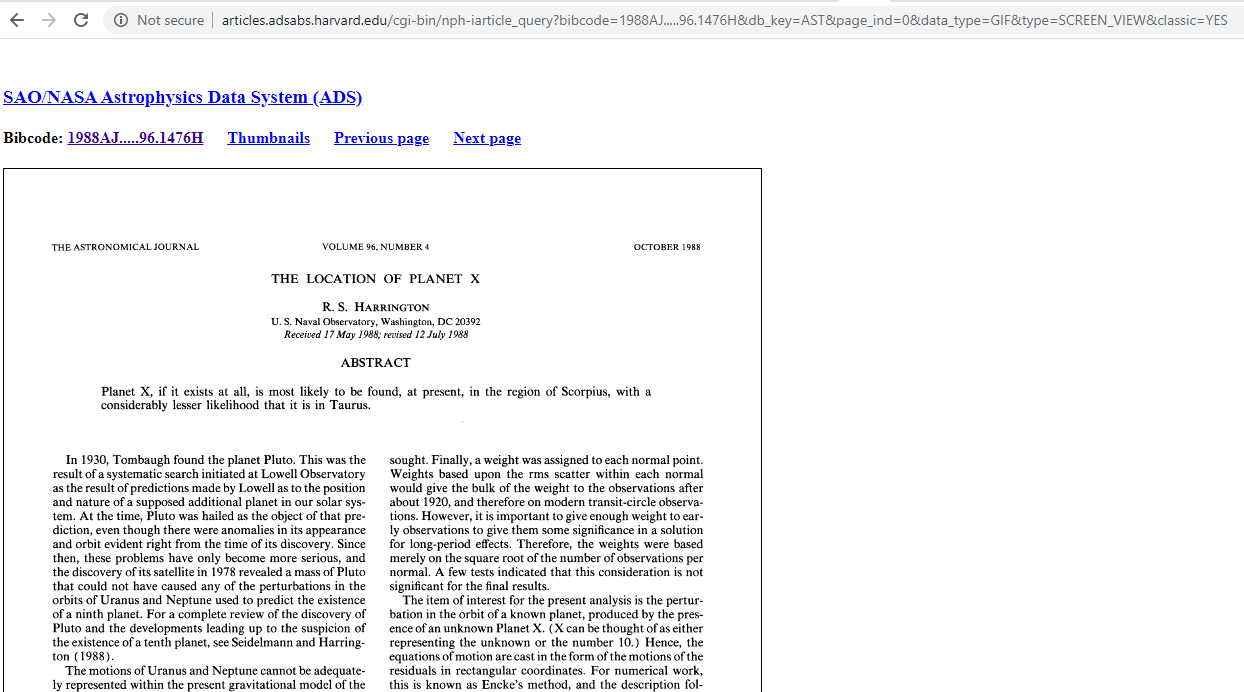 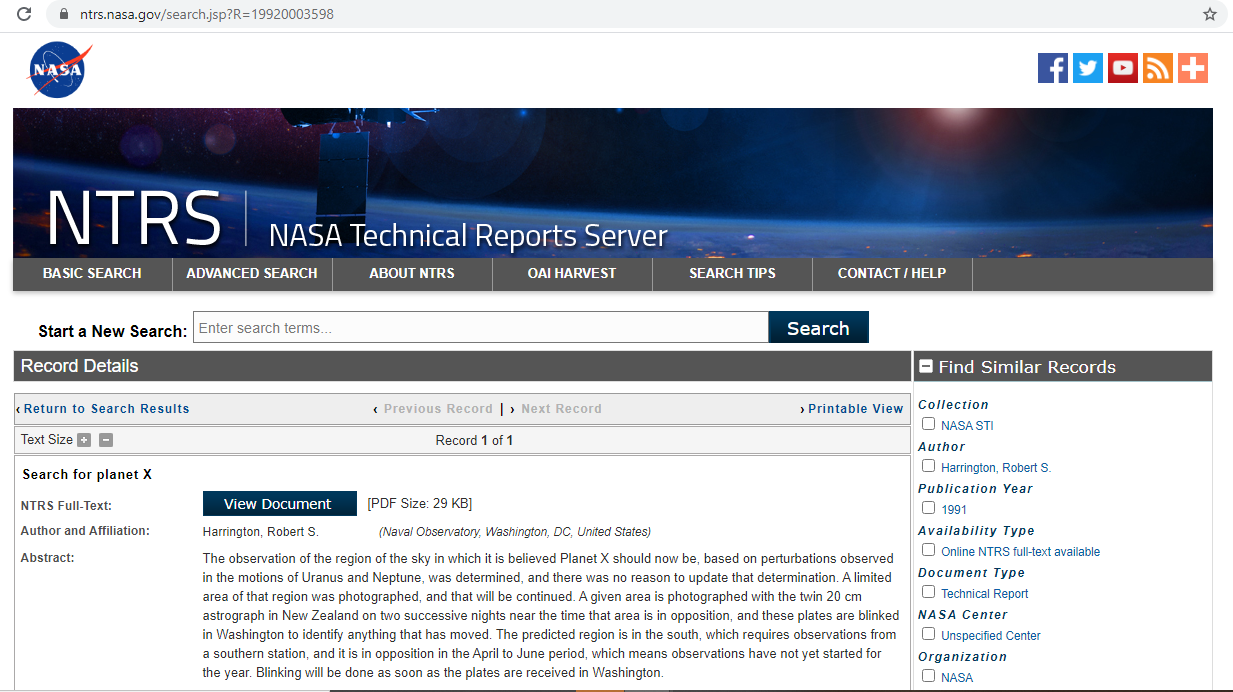 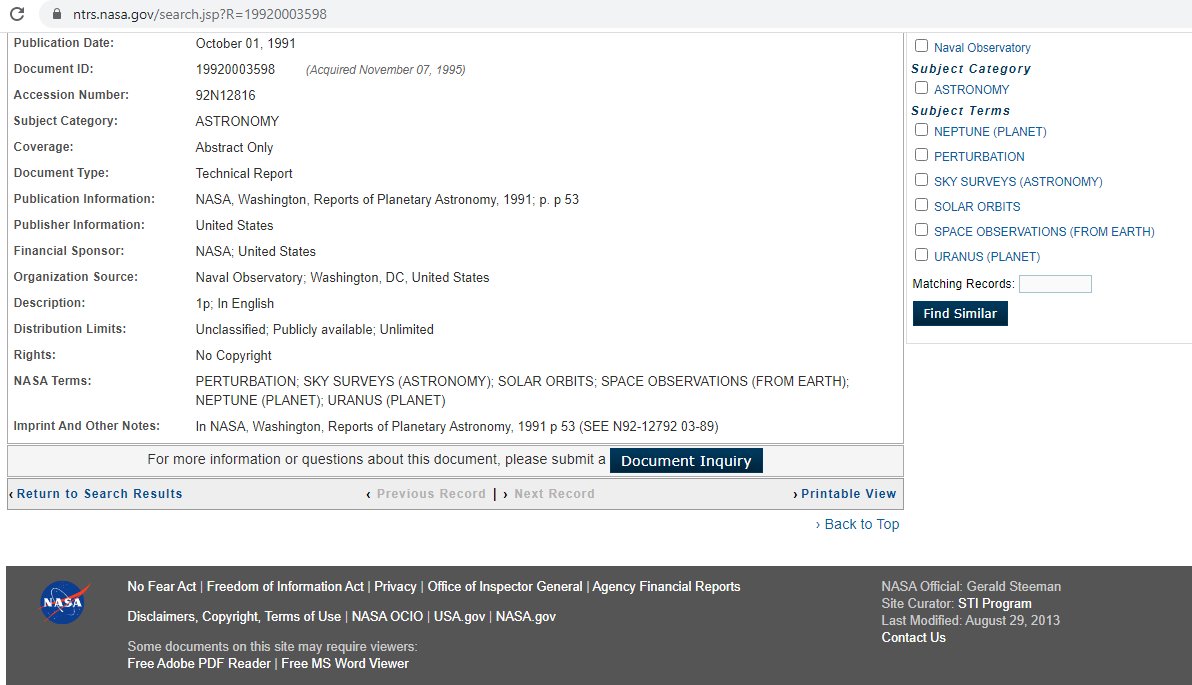 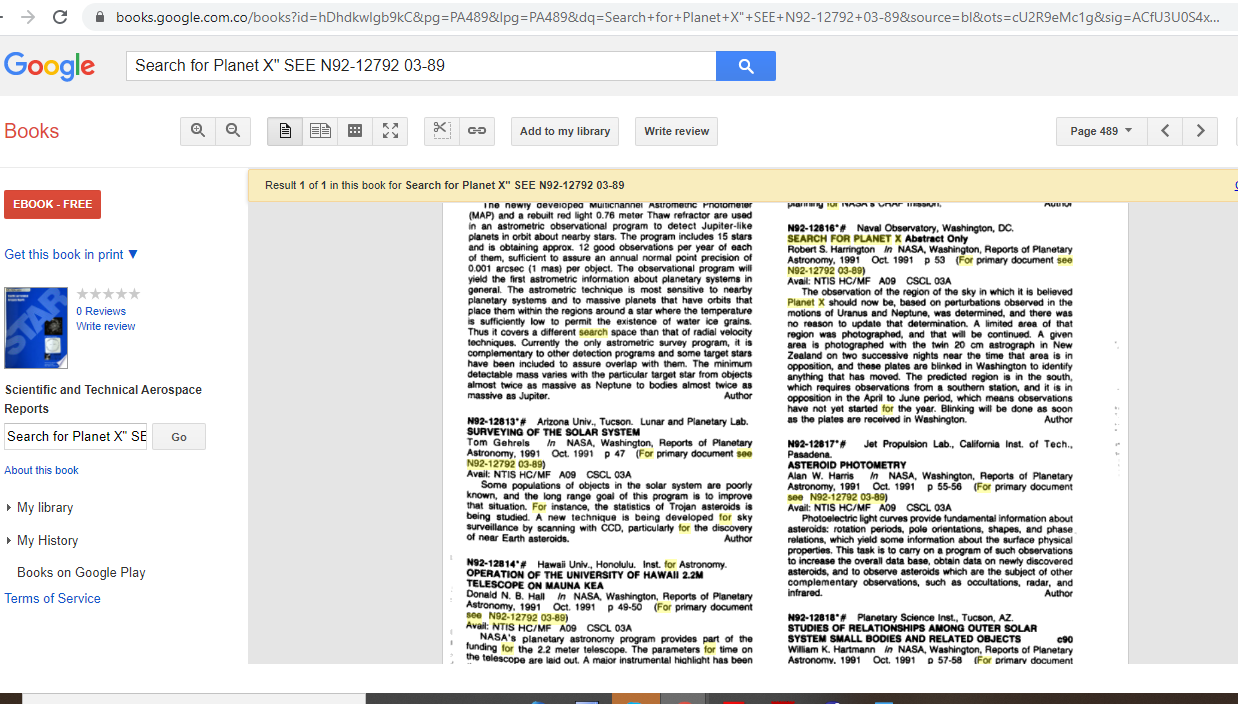 I recommend that you also purchase the 2015 release “20th Anniversary Hale Bopp Harrington Expedition Planet X Update” downloadable product when you select this with the drop down purchase button. If you have not read my books (recommended) then they are also available at reduced pricing in the drop down menu on the sales page when you purchase this book. My science work was at the core of all this very complex topic throughout the 1980s 1990s 2000s 2010s and now into the 2020s. Throughout this time I was the only source of sane and real information as the government sponsored both the “white hats” which denied there was any such thing and also the constant parade of crazy loony tunes that filled the air waves ranting about Planet X. Now you will understand the real history. You can also listen to all my radio shows from the year 2002 and on which covers many of these topics in real time. See my web page to link to the commercial free radio show archives.

To order my other materials follow this link and scroll down to the book/CD/DVD/Calendar/Poster section https://www.jmccanneyscience.com/SecWebOrderPg.htm