May 08, 2008 posting ... below are some pics direct from south amercica of the chaiten volcano eruption of may 3 ... note the level of electrical activity as explained in my books (modern science has no explanation for these electrical outbursts) ... now enter a new possible twist to the two volcanoes that erupted in chile this past week (news is still coming in on the much larger more recent eruption) ... this volcano had been dormant and no one anticipated these eruptions ... also note the severe storm in burma with the undaunting pressure from the UN and USA to give "aid" ( a pittance 3 million dollars ... less than a dollar per person for the affected area !!!) ... question ... could the volcanoes and burma storm be the result of our boys in black playing with their laser satellite and what would be the motive ??? here is what is at stake ... the "military junta regime" (although not exactly saints themselves) in burma (Myanmar) rejecting the world bank ... and the "democratic" issue being pushed by the bush - United Nations - world bank to "join" the rest of the "developing world" ... the satellite lasers could discharge the vertical capacitor of earth and drive these "acts of god" ??? i will be talking more about this but in the mean time look at the pics that were emailed from a listener ... by the way listen also for news of my upcoming releases ... jim mccanney NOTE as a post script ... in late april 2015 more volcanic eruptions occurred in Chile ... see the picture of the day sub-page for details ... 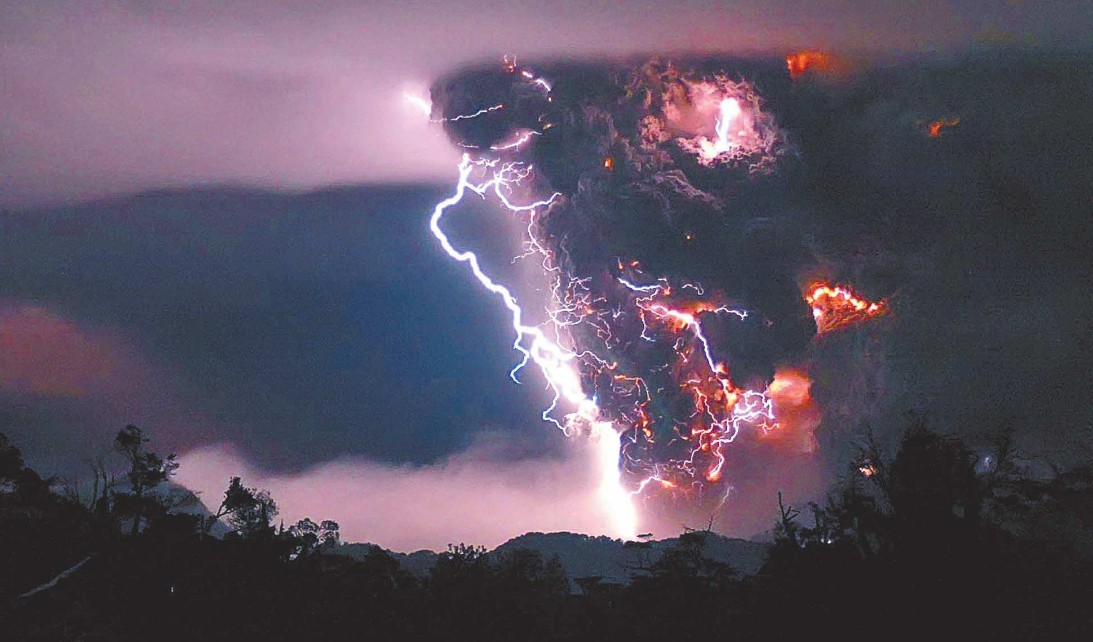 the Chaiten volcanic plumes discharging the vertical electric field of earth that connects to the ionosphere and its earth encircling capacitor that Tesla was tapping into to extract unlimited electrical power with his tesla tower as explained in my books "Atlantis to Tesla - The Kolbrin Connection" and "Principia Meteorologia - The Physics of Sun Earth Weather" ... in these books i also explain how the ancients saw the entire earth erupting as the large comet that eventually became the planet Venus passed close to earth creating volcanic eruptions the world over and moving entire mountain ranges as well as creating huge tsunamis ... the ancient legends and texts describe these events in frightening detail as only a few survived to tell the tale ... modern science still cannot explain everyday occurrences like the lightning above volcanic eruptions that we all witness as documented in these pictures .. yet in their arrogance and ignorance they deny the most important events in the history of the world and human race ... jim mccanney note in the picture below that the eruption and caldera are to the far lower right .... however running down the front central part of the main plume and then extending downwards to the mountain tops is a tornado-like structure (the white funnel cloud that is directly below the thundering vertical plume) ... it is interesting also that the column splits in two and forms the standard anvil head structure as the hot rising gas cloud has its top blown off as it hits the high altitude sheer winds ... as noted ... this will cloud any viewing of the southern hemisphere for years to come as this cloud continues to circle the earth ... Patagonia was the only place where one could successfully observe the southern extreme sky for a possible glimpse of any planet x type objects coming into the solar system from that part of the sky (planet X types of objects may come in from any direction BUT ALL the government funded telescopes are in this area of south america)... jim mccanney NOTE THE LIGHTNING IS OUTSIDE OF THE CLOUDS ... PROOF THAT THE SOURCE OF ELECTRICAL ENERGY IS OUTSIDE THE PLUME 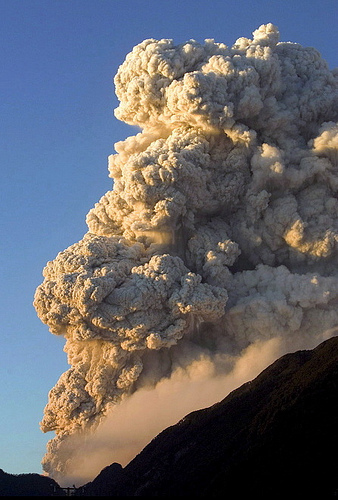 NOTE THE STEAM ... A VOLCANIC ERUPTION LIKE THIS IS A GIANT STEAM ENGINE

Picture of the Day Sub-Page