Yellowstone Volcano is overdue for a major eruption.  ALL signals indicate that it is a question of when not if.  With an all time high count of earth shifts and quakes in recent months many believe the volcano is ready to erupt.  When it does, the water in Yellowstone Lake will drop into the fissures and onto hot magma causing the major eruption.  Without that water there will not be a major eruption but a localized lava flow.

Through talk show host John Moore we began a program of contact with both Federal Government Agencies and the officials both federal and state of Wyoming.  The results were as you would expect.  John was referred to "staff" with one woman responding "what is a volcano?".   Needless to say after trying to get past staff and awaiting responses from the more than incompetent chain of command, nothing happened and no one ever responded.  One comment hinted that one should rely on the staff of government agencies and hired scientists however, what is clear is that these ranks are filled with paper pushing incompetent tier 2 morons whose main goal in life is reaching their pension so they no longer have to pretend to do nothing.

This project MUST be accomplished immediately to avert a world wide catastrophic volcanic explosion.  Without the water in the lake the most that will happen is a localized lava flow.  The last Yellowstone Super Eruption occurred approximately 640,000 years ago and exploded an estimated 2500 times the amount of ash as the Mount St Helens eruption that carried ash as far as New York City.

this page describes the details of the project which can be accomplished with minimal cost and effort ... first look at the photos to see the situation ... 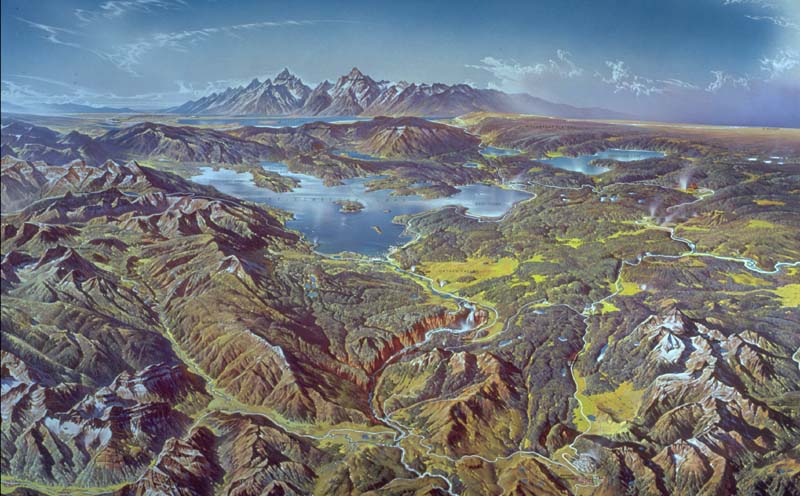 View of Yellowstone Crater and Lake from the North

this is one of the evacuation routes 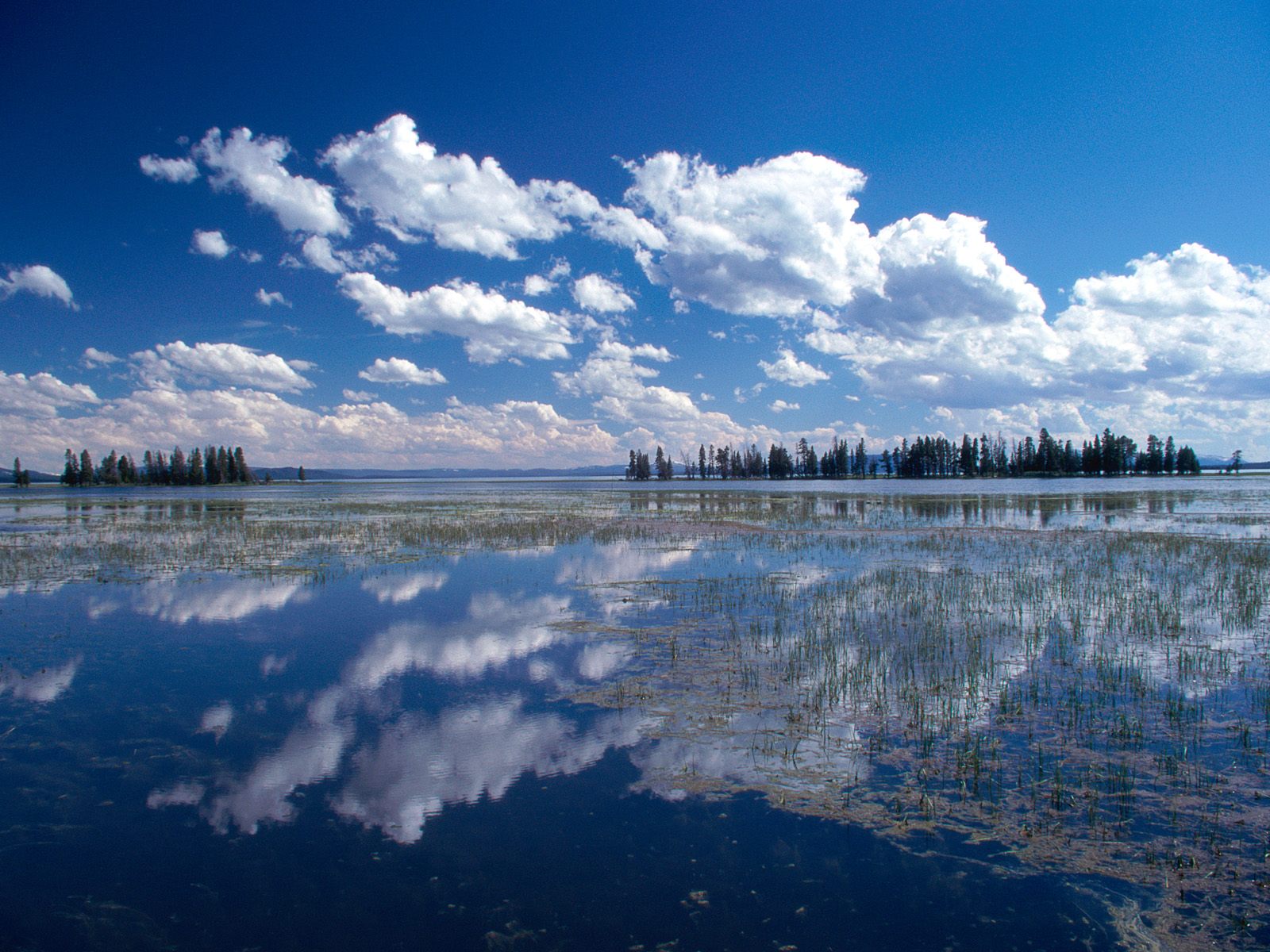 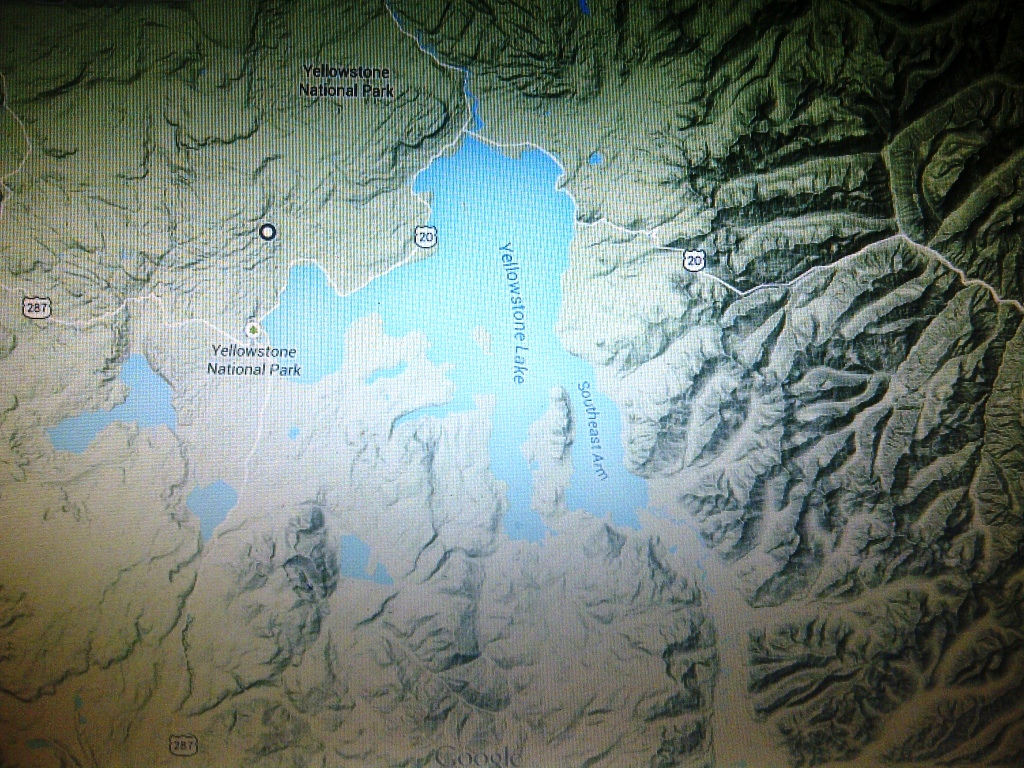 Yellowstone Lake is at 7,733 feet elevation. The entire lake is spread out over 136 square miles, with 110 miles of shore. The lake will vary in depth, from 139 feet to 390 feet at its deepest spot. Yellowstone is the largest freshwater lake in North America at over 7,000 feet.

"Superheated steam’s greatest value lies in its tremendous internal energy that can be used for kinetic reaction through mechanical expansion against turbine blades and reciprocating pistons, that produces rotary motion of a shaft. The value of superheated steam in these applications is its ability to release tremendous quantities of internal energy yet remain above the condensation temperature of water vapor; at the pressures at which reaction turbines and reciprocating piston engines operate."

In a volcano the water collects in the caldera after it sinks into the ground after a major eruption.  Smaller volcanoes remain elevated but eventually they slew off the upper layers or erode by water rain or ocean erosion until they are completely eroded away.  In the case of Yellowstone the crater itself is over 50 miles in diameter.  Actually there are many craters that form the basin at Yellowstone that were created during different explosive events at varying times.  The most recent are listed below along with their ash distribution maps.  The currently most active area at Yellowstone is directly below the lake area.  When earth quakes as far as 1000 miles distance erupt they affect the underground activity of the Yellowstone basin.  The following is an explanation of distant earth quakes which have adversely affected Yellowstone (so it is not just local earthquake activity that is dangerous to your well being). "Further research shows that earthquakes from great distances do reach and have effects upon the activities at Yellowstone, such as the 1992 7.3 magnitude Landers Earthquake in California’s Mojave Desert that triggered a swarm of quakes from more than 800 miles (1,300 km) away and the 2002 7.9 magnitude Denali Fault Earthquake 2,000 miles (3,200 km) away in Alaska that altered the activity of many geysers and hot springs for several months afterward."

Below are maps of geologically recent explosions that resulted in death over the maps.  I once visited a dinosaur museum in eastern Nebraska called the Ashfall Fossil Bed Historical Park that was covered by ash from an earlier Yellowstone volcano when the hot spot that now is under Wyoming was then in Idaho.  This Super Volcano occurred about 12 million years ago according to geologists which seems to be a possible scenario.  Horses and Hippos are the primary species entombed in the ash beds.  Geologists know that water turning to steam is what creates the super volcanoes so WHY are none of them calling for removal of the water in Yellowstone Lake.  REMOVING THE WATER FROM YELLOWSTONE LAKE IS A REQUIRED MEGA PROJECT THAT MUST BE ENACTED IMMEDIATELY FOR THE WELFARE OF THIS PLANET. 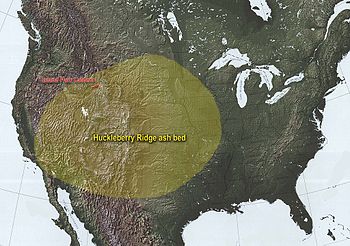 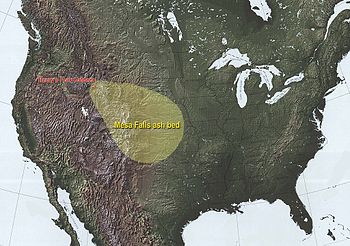 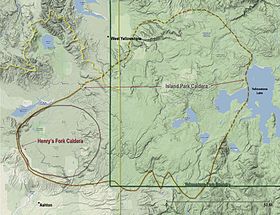 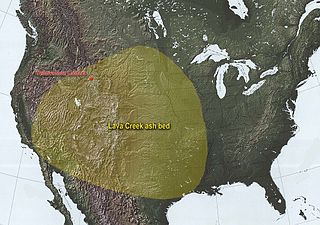 we are overdue for another major eruption ... during these past eruptions there was no one there to drain the water from the caldera lakes and prevent the massive devastation in the brown area on the above maps that then condemned the rest of the world to mass extinctions as a result of secondary effects ...

the solution does not need a great deal of explanation ...

drain the water from Yellowstone lake !!!

You can see from the location of the prior calderas and resurgent domes that the logical path to drain the lake is to the south ... from the "southern arm" ... there is already a naturally occurring drain path one simply has to cut it deeper to let the water drain out ...

As noted at the beginning of this sub-page I went through a person who has credentials in contacting the various government agencies and met with absurd ineptitude.  jim mccanney

CLICK HERE TO RETURN TO THE MAIN HOME PAGE --->  http://www.jmccanneyscience.com